Humans have not had much of an opportunity to work on the Moon. The 12 Apollo astronauts who got to explore its surface clocked in 80 hours in total of discovery time. From their brief encounters, and from extensive analyses of Apollo samples and lunar meteorites that were found on Earth, scientists have learned nearly as much as is possible to learn about the lunar environment without much contact with the surface. Now, for the first time in half a century, NASA’s Artemis missions will allow scientists and engineers to examine the surface from up close. This will teach us how to move safely across lunar soil, known as regolith; how to build infrastructure on top of it; and how to keep humans safe in space. The techniques scientists will develop on the Moon will make it possible for humans to safely and sustainably explore farther destinations, such as Mars.

Here are a few things we’ll learn by spending time on the Moon’s surface: 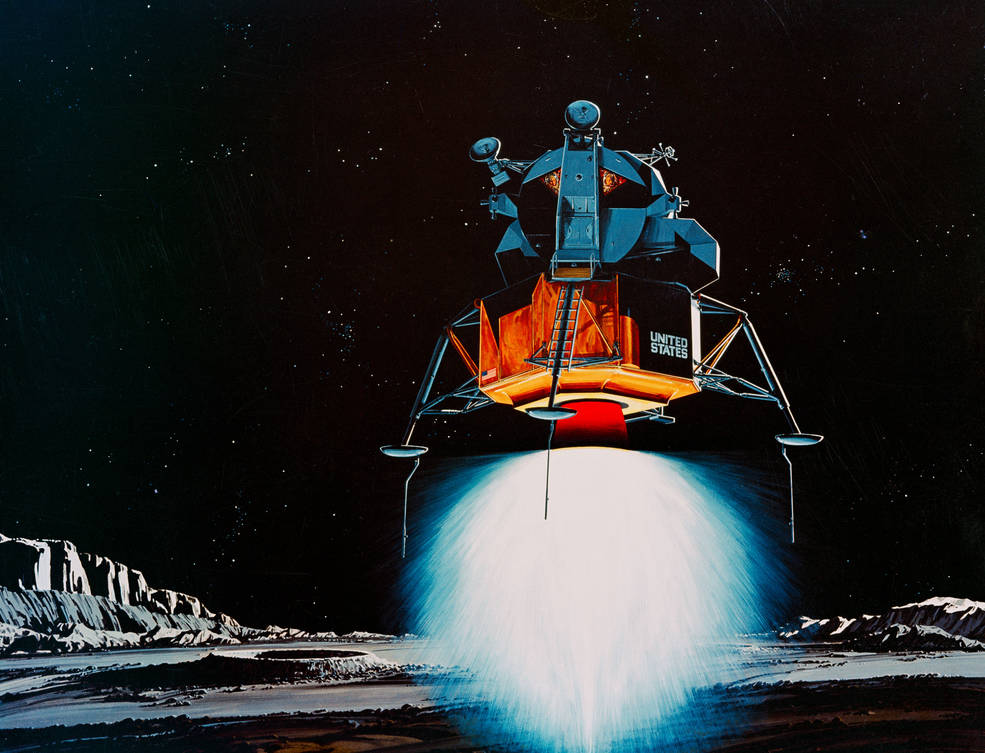 An artist’s concept from 1969 depicting the Apollo 11 Lunar Module descending to the surface of the Moon. With no atmosphere, the exhaust from the vehicle expands significantly.
Credits: NASA/JSC
Find image here

As a spacecraft descends to the lunar surface, it sprays it with water and other gases that are released as the vehicle thrusts its engines to slow itself for a soft landing. For astronauts who will be cataloging local water supplies, these Earthly contaminants will make it hard to distinguish between bona-fide Moon water and water from their vehicle’s exhaust. It could also muddy chemical analyses of the lunar surface and its super thin atmosphere, which is called an exosphere.

An animation from one of Prem’s simulations showing where water vapor released by a spacecraft goes over the course of 65 seconds during descent. Landing is assumed to be at 70 degrees south latitude, 7 a.m. lunar local time, when the surface temperature is about 200 kelvins (minus 99.67 F, minus 73.15 C). The spacecraft is too small to see on this scale, but it’s located in the darkest blue part of the vapor cloud. The width of the scene is about 19 miles (30 kilometers). Blue represents water that is above the surface (in the exosphere); gray is water that settles to the surface. Currently, Prem models only the water vapor (about 220 pounds, or 100 kilograms) that’s released from a vehicle about the size of China’s uncrewed Chang’e-3 Moon lander. Water is roughly a third of the total mass of gases released during descent.
Credits: Parvathy Prem

To protect the accuracy of science on the surface, many scientists are building computer models and lab experiments that can help predict how our spacecraft exhaust will affect the lunar environment. For instance, Parvathy Prem, a planetary scientist at the Johns Hopkins University Applied Physics Laboratory in Laurel, Md., designs software that simulates what happens when a vehicle discharges foreign gases at the Moon.

Her simulations show that exhaust from a small spacecraft — the size of China’s uncrewed Chang’e-3 Moon lander — would spray about 661 pounds (300 kilograms) of water and other gases several kilometers out from the landing site. For a heavier, human-size landing vehicle, this area would likely be much wider and may require astronauts to venture many kilometers away from their base for fresh samples of Moon soil. (Apollo astronauts ventured from a few hundred meters to dozens of kilometers away from the command module for this very reason.)

Now, Prem is developing new simulations to understand what happens to water after it’s released into the Moon’s environment. Does it linger in the exosphere and then blow into space? Does it settle into the regolith, or do its molecules hop around the surface? “We’re trying to build up a set of solutions in which we assume different things about interactions between water molecules and the Moon’s surface,” says Prem, “so that next time we’re able observe a landing and take measurements, we’ll have this set of solutions that we’ve built up and we’ll be able to see which one matches best to quickly determine what’s happening.”

Prem is part of a team at NASA’s Goddard Space Flight Center in Greenbelt, Maryland, that will send an instrument in the next few years on one of NASA’s Commercial Lunar Payload Services landers to investigate these questions. The team will gather information that will inform not just Moon exploration, but also the way scientists will collect future samples from asteroids, Mars and other bodies. “We’re not going to be able to avoid contamination,” says Prem, “but we need to know how much of it happens so we can account for that.”

How to work with soil that behaves like baking flour 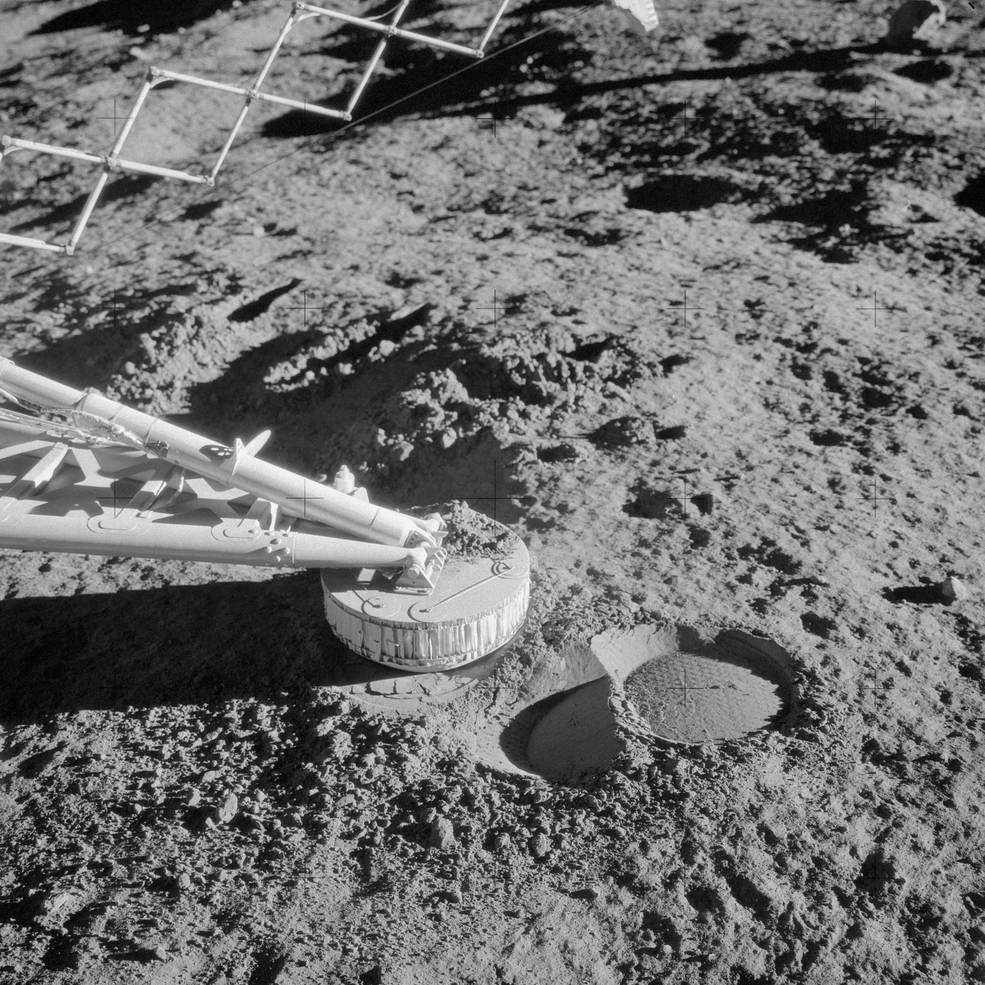 A close-up view of a footpad and surface sampler with scoop (arm, out of frame) on the Surveyor 3 spacecraft, which was photographed by the Apollo 12 astronauts during their second extravehicular activity (EVA) on the Moon. The Apollo 12 Lunar Module, with astronauts Charles Conrad Jr. and Alan L. Bean aboard, touched down in the Ocean of Storms only 600 feet from Surveyor 3. The uncrewed spacecraft soft-landed on the Moon on April 19, 1967. Note the imprint in the lunar soil which was caused when the Surveyor 3 bounced upon landing.
Credits: NASA
Find image here

Imagine sticking a measuring spoon into baking flour. Regolith feels something like that. Regolith is most comparable to Earth sand, which is made of rocks ground up by wind, rain and other elements. But each grain of sand is wrapped in molecules of air that add space between them. Since there’s no air on the Moon, regolith is more cohesive, meaning its grains stick close together like those of baking flour.

Knowing about properties of regolith is important in designing missions to the Moon. If vehicles are to drive long distances across the surface, and if astronauts are to dig regolith to build infrastructure, scientists and engineers need to know how best to equip them, says Christine Hartzell, an aerospace engineering professor at the University of Maryland in College Park who studies regolith on the Moon and on asteroids, including Bennu, where the OSIRIS-REx spacecraft is currently orbiting.

“If you’re designing something to drive on the beach, you design very thick tires because they have to deal with sand that’s compressible and shifts underneath the wheel. But you would design narrow tires for a road bike because it drives across a surface that’s really hard and uniform,” she notes. “On the Moon, we need to know if we’re going to be driving over a gravel surface or over a sand dune.”

Regolith is made of loose rocks, pebbles and dust, and it covers the entire Moon. It distinguishes itself from sand in a number of ways, besides cohesiveness: Unlike sand, which gets rounded over eons by wind and water, two phenomena that don’t exist on the airless and dry Moon, grains of lunar soil are sharp, pointy and potentially abrasive to space suits and equipment. 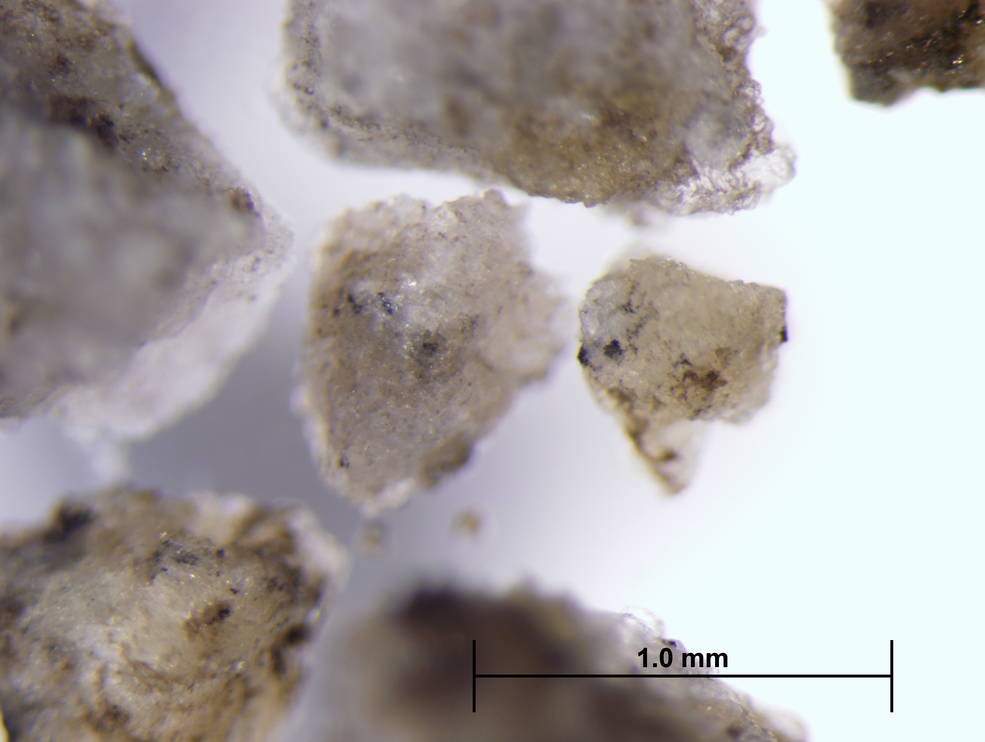 This is a photo of regolith particles collected from the Moon’s surface during the Apollo era. These are fragments of volcanic rock, and they contain a lot of a mineral called plagioclase, which is rich in calcium and aluminum.
Credits: Natalie Curran/NASA

Moon soil also becomes electrostatically charged by solar particles that smash into the Moon’s surface. This makes it stick to equipment, similar to how clothes can stick together when you take them out of the dryer. In fact, there is still some regolith stuck to spacesuits from Apollo missions.

Astronauts moving across the surface also can amplify electrostatic forces, similar to someone building up static electricity after shuffling across a carpeted floor. Their activity might cause dust particles from the surface to levitate up to 10 meters (33 feet), Hartzell estimates.

If astronauts are to encounter clouds of sticky dust, scientists and engineers need to be prepared to deal with that, she says: “We want to know what happens to the dust once it stops levitating. If it settles, does it gum up the mechanics of a lunar vehicle? Does it deposit on optical instruments and then make everything look cloudy?” Robotic exploration of the surface in the coming years will help scientists answer some of these questions in preparation for sending astronauts.